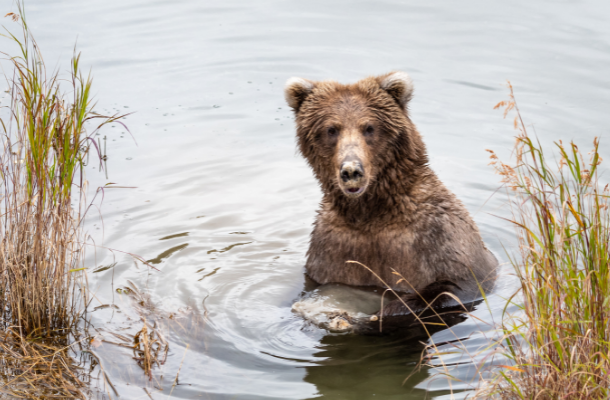 Chances are that if you have heard about Katmai National Park and Preserve in Alaska, you have also heard some references to bears. The link between the two is based on truth but bears are not all that there is to this national park. Katmai has an amazing history from its origin and its continued development. Katmai now attracts tourists from all corners of the world and has lots in store for you to explore and enjoy.

A Trip Down History Lane

In 1912, Novarupta Volcano on the Alaska Peninsula erupted and shook the entire area that now makes Katmai National Park and Preserve. What used to be just wilderness was turned into a valley of smoke and ash. Mountains in the area had layers of ash upon them and small holes and cracks which let out steam and gas. It is said that such a violent volcanic eruption had not happened for millennia before this.

In 1915, a botanist named Robert Friske Griggs led an expedition of the National Geographic Society to observe the aftermath of the Katmai volcanic eruption. Upon seeing the valley floor with so many steam vents, he named it “The Valley of 10,000 Smokes”. In 1917, Griggs and his fellow explorers went back to the Katmai area to primarily explore the valley and quickly worked their way up through the ash-filled river valley and over the pass. Historians have recorded the experience as “a month of terror and elation” for these explorers who made sure to take chemical and geological samples and photographs from the area, as they also made rough maps for their own remembrance and records.

This expedition was important beyond a regular geological research attempt. The world was going through World War I and here was a natural event of a volcanic eruption that had shaken the area beyond the capabilities of any man-made explosive. Americans were tired of the war and at the same time were enthralled by the volcanic discoveries that were being made at that time in Alaska. While Griggs’ explorers were recording the eruption, Griggs himself was focused on preserving the site.

The vivid descriptions that made part of the articles Griggs wrote about the Katmai site proved to be a perfect distraction and a perfect opportunity of advocacy for the subscribers of National Geographic, which slowly but surely turned into a full-fledged conservation movement in the United States. Chiefs of National Geographic became Griggs’ partners in campaigning for the preservation of the valley and finally, in 1918, enough pressure and persuasion had been built that the then President Woodrow Wilson declared the 1,700 miles of Katmai land as a National Monument.

The boundaries of the land were changed several times here and there, but in 1980, it was formally enlarged from its natural approximately 4 million acres to 4.2 million acres and was transformed and named a national park and reserve. From 1918 to 1950, despite the site being a national monument, Katmai remained a destination of only the bravest and the boldest. In 1950, it is estimated that the first rangers were stationed at the site. Even today, the Katmai National Park and Preserve remains more a wilderness than an artificially developed tourist destination.

Now before you get scared that there are still volcanoes that might erupt anytime in Katmai National Park and Preserve, the truth is that there are only fumaroles left now, and even among those only a few are active. It is believed that t the peak of the volcano collapsed and transformed into a lake of nearby volcanic Mount. Since the eruption, the Ukak River and its tributaries have cut gorges into the ash that accumulated in the “Valley of Ten Thousand Smokes”. So if you are planning your next trip to Katmai, you can expect to only see steam if anything.

Now moving on to the ecosystem of the park, Katmai has garnered a reputation for its lakes, mountains, wild rivers, forests, and marshlands. The wildlife attractions in the area are a whole another reason for explorers and adventure seekers to take a trip to this national site. As was mentioned at the beginning of this article, a very notable part of this wildlife is the grizzly bears, also called Alaskan brown bears. If you pick the right time of the year to visit – summery weather – you might also catch dozens of these bears feeding along the Brookes River. You might have seen on TV how a bear can catch a fish from inside the water at a lightning speed but in Katmai, you get to see that in person.

However, bears are not the only c animal residing in the Katmai National Park and Preserve. You may also come across wolves, foxes, moose, and reindeers. Several species of birds may also keep your eyes busy towards the sky. If aquatic life is what interests you, then Katmai still has you covered. The national park is also home to several large lakes including Alagnak Wild River. The second largest lake, Naknek Lake, is known to support all five species of Pacific salmon as well as rainbow trout, Arctic char, Arctic grayling, and northern pike. All this also makes this park a favorite destination for sport anglers.

Floatplanes will take you to the main visitor area of the park, without you having to fight bears along the way. Should you also wish to see the stunning coastline, then you will also have the option of boats. Katmai National Park and Preserve truly has the fjords along with breathtaking cliffs and waterfalls.

A Newer Addition to the Landscape

It might be of interest to you that within this national park, preserving more than 9,000 years of human history, there is one little modern addition to see as well – a new bridge. Constructed in 2018-19, this permanent bridge and corresponding elevated boardwalks came into being to remedy the lengthy and frequent delays from the older floating bridge. The new long bridge averaging a height of 8 to 10 feet above the ground level cost around $6 million to build, according to the National Park Service (NPS) website.

Granted that this newer construction reduces the thrill and danger of crossing the Brooks Rover, but at the same time, this means that you can now enjoy and access the area without worries. Another interesting nugget here to note would be that this bridge is also an improvement for wildlife movements and access in the lower Brooks Rover in addition to being a more efficient way to transfer lodge facilities.

Is There More than Sightseeing?

Now that you know everything about the place and the surroundings that will be welcoming you on your trip, what are some activities can you add to your to-do list?

First, consider the floatplanes. Who doesn’t want to sit in a small aircraft and feel like they are on a secret mission like James Bond? Well, this is your chance to do that, with the added advantage of absolutely beautiful scenery underneath you as you fly towards the visitor area. If you are feeling even more adventurous, then try rafting. Kayaking is also an option through the chain of lakes and rivers called Savonoski Loop. For the more fit and active ones among you, there is also the option of hiking through the Valley of 10,000 Smokes just like Griggs and his fellow explorers did. You can also do camping in the backcountry.

However, while you are planning this trip, you might want to remember that just like any site worthy of adventure and exploration, Katmai National Park and Preserve is also not easily accessible through the roads by any nearby town. This means that you will need to do some extra planning and preparation, and also set some money aside for advanced reservations. Several companies offer attractive and cost-effective tour packages to the park, including one-day trips. So make sure to do your research and planning before embarking on this exciting journey.

Let’s get your adventure spirit back with one last detail. When you get to Katmai National Park and Preserve you will have to watch a video on bear safety. Unless your floatplane pilot doubles as your guide, you will be on your own afterward. The good part about this place is because of its vastness, even with as many as 200 visitors on average at any day during the peak season, it does not feel crowded. Bears have also become used to human presence but be prepared, that they don’t shy away either. You can watch them feeding, playing, or even sleeping in their natural habitat while also enjoying the wildlife around them and yourself. Just throw in some rain gear, some strong boots, and a pair of binoculars in your travel bag. After you have done the necessary research for travel, you’ll be ready for your trip to Katmai National Park and Preserve with your friends or family.