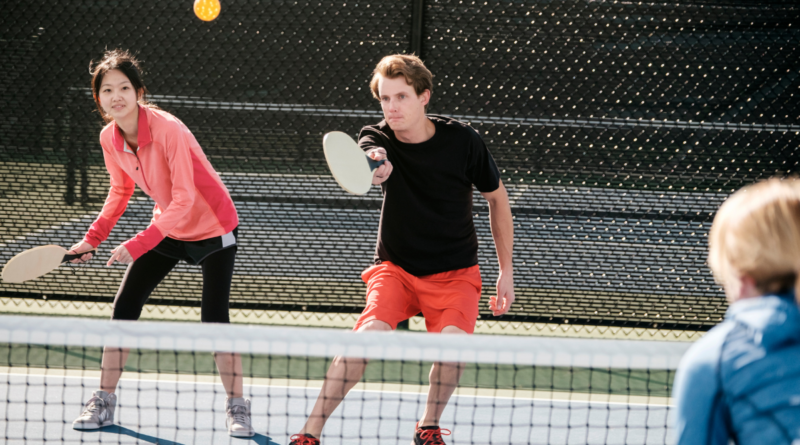 Pickleball is an increasingly popular sport. But what is pickleball exactly, and where did it come from? Well, we’ve got a quick history lesson for you!

Pickleball was invented in 1965 in Washington state. The game was designed by Joel Pritchard. Pritchard was a businessman, politician, and former lieutenant governor who wanted to create a game that could be played indoors during the winter to entertain children.

What’s With The Name Pickleball?

The naming of pickleball has two stories. One story is from Pritchard’s wife who said that the game reminded her of pickle boats in crew where oarsmen were chosen from the leftovers of other boats. Another naming origin came in the 1970s when Joel said in an interview that the sport was named after their dog, Pickles. Whichever the name came from, the sport has really taken off and is enjoyed and played across the US, Canada, and all over the world!

How to Play Pickleball

Pickleball combines elements of tennis, badminton, and ping pong, and is played on both indoor and outdoor badminton-sized courts, using a slightly modified tennis net. It’s played using a paddle and a plastic ball. The game is played much like tennis, with singles and doubles games and the rules of the game are simple and easy to understand.

Pickleball is great for almost all ages and is quickly learned. There is no need for expensive equipment, and anyone can get started. You can play the game on any hard surface, such as a beach or a driveway. You can play it when the weather is hot or when it’s too cold to go outside. You can play by yourself or with a partner or with a large group of people. There are three main rules of pickleball. 1) No more than two contacts per stroke, 2) Always allow your opponent to strike the ball first, and 3) The ball must be struck above the mid-court line.

The forehand and backhand groundstrokes are the basic strokes used whenever a player returns a ball from a position of midcourt to deep in the court. A forehand is from the same side of your body as your dominant hand, and a backhand is hit from the opposite side. This rule makes for fast play with high rallies. Another advantage of pickleball is the ability to hit any type of shot from anywhere on the court.

It’s Easy to Get Started!

It’s a lot of fun that both the young and old can enjoy because the game does not require a lot of speed or stamina, so pickleball is ideal for seniors. The game is a great cross-training program for most any other sport. You can get a good workout on the court and with a little skill, and have a lot of fun at the same time.

Many local communities have pickup pickleball games, and leagues, so check with your local or town government to get started and get back into shape with this super fun and easy game!