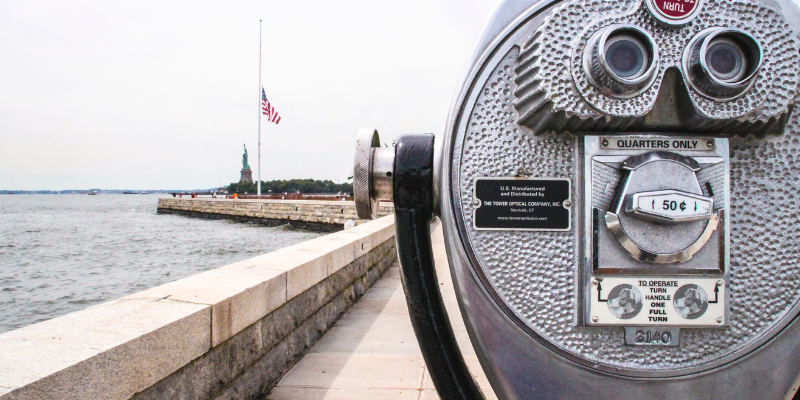 Traveling across the U.S. and visiting various destinations and landmarks, tells a distinct story of how America came to be and has developed through the years. These places, buildings, monuments, all share important information and are extremely interesting and worthwhile to visit. Here is our top list of U.S. landmarks.

Located on an island off the shores of South Carolina, Fort Sumter is a wonderful destination to experience an incredible piece of history.

Truly an iconic piece of history, the Statue of Liberty makes our list. When immigrants approached Ellis Island, the vision of this green copper lady meant a chance for a new opportunity. Plan to take a ferry over and a guided tour to learn the story of the statue and what it has meant to people throughout time. The ride over and your visit will also give you spectacular views of NYC.

It may sound funny to recommend visiting a concrete dam, but the Hoover Dam between Nevada and Arizona is amazing and worth the trip. The dam was a massive undertaking by many ingenious workers who risked their lives to build it. It was completed by 1936 during the Great Depression. Take a tour and learn so much about the engineering of the dam. Don’t like that sort of stuff? Well, the views alone are worth taking the tour.

Symbolic of our democracy, the National Mall in Washington D.C. is a must-see. Pretty green grass provides a path from the U.S Capitol to the Potomac River. It’s such a well-known place, to see it in person is magical. Here you’ll find numerous monuments, statues, and more to see and discover.

Located in historic Boston, Massachusetts, we think the Freedom Trail is tops as far as learning so much about the early history of the United States. This 2.5-mile walk will teach you about Paul Revere’s famous ride, historic revolutionary battles and allow visits to many burial grounds, churches, and meetinghouses of the revolutionary times. You can opt to explore yourself, take a tour, or even download an audio tour.

The “Gateway to the West” is St. Louis Arch and is an amazing landmark to see in Missouri. Over 43,000 tons of steel and concrete were used to make this mammoth monument to make the United States expanded to the west. Take a tram tour to the top, about 630 feet up.

Philadelphia’s Independence Hall is where our nation became unified. Considered the birthplace of the Declaration of Independence and the Constitution, this is a must-see destination. Free tours can get busy so best to go early morning. The Liberty Bell is right across the street!

Considered one of the “7 Wonders of the World”, the Golden Gate Bridge in San Francisco. Take a guided tour across the 1.7 miles of the suspension bridge. Take in the impressive views of the bay. One of the longest bridges takes in the humongous columns and network of suspension cables.

Can’t forget the Alamo when making our list of top U.S. landmarks. The Alamo was the clay fortress for the 1836 battle between Texas settlers and the Mexican army. It led to Texas’ independence. Located in the heart of San Antonio, explore on your own or take an audio tour.

Carved in the granite mountainside of the Black Hills of South Dakota, Mount Rushmore is amazing in person. The sculptures of the heads of Presidents Washington, Jefferson, Roosevelt, and Lincoln are 60 feet tall. You may even spy on some cool wildlife during your visit.

This U.S. destination in the state of Arizona gets you in the vast outdoors. Truly a gorgeous and well-known view, the Grand Canyon is an awesome expanse of rock formation. Take a hiking tour or explore leisurely on your own on the marked trails. A rafting tour may also be a really fun option.

The very first national park of the U.S., it’s one of the greatest. Not only is it a majestic beauty filled with wildlife like bears and bison, but it is also home to “Old Faithful”, a geyser that shoots up water out of the earth. Yellowstone is highly volcanic so many geysers can be found.