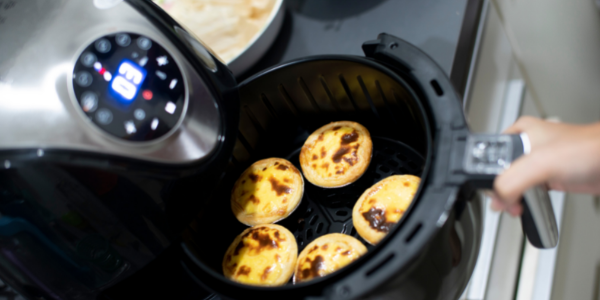 Is buying an Air Fryer worth it?

An air fryer is a countertop convection oven, designed to simulate deep frying. Its compact space facilitates faster cooking, with hot air rushing down and around the food placed in a fryer-style basket.

Air fryers first hit the US market in 2013, and recent years have seen a surge in their popularity. The reason is that people love their fried foods but want to eat healthfully. Makers of air fryers advertise it as a route to making food quicker, without the adverse health effects that oil-fried foods are known for. However, some people are skeptical about the alleged benefits of air-fried foods, while others are concerned about its possible risk factors like toxicity.

The question is, is the air fryer worth your hard-earned money? The answer to that depends on your lifestyle choices and taste preferences. That said, a majority of the users of this appliance claim that the benefits of the air-fryer far outweigh the potential risks associated with it. So read on to find out if this appliance would hold a useful place in your kitchen.

How Do Air Fryers Work?

An air fryer is usually square or egg-shaped and about the size of a coffee maker. A variety of foods such as chopped potatoes, zucchini slices, and chicken nuggets can be put in its slide-out basket can be cooked without oil (you could add a light coating of oil if you like). When you turn on the air fryer, its cooking chamber radiates heat from a heating element near the food, and a fan circulates hot air through it. There is a tray below the basket to catch the grease that drops. The outside layer of the food is cooked first, giving it a crispy brown texture while keeping the inside soft, just like deep-fried foods.

What Can You Cook in an Air Fryer?

An air fryer can cook pretty much anything that you would normally fry in oil. A variety of snacks and dishes ranging from pizza, doughnuts, fish, cheese sticks to french fries, onion rings, vegetables, chicken fingers, or nuggets, can be cooked in an air fryer.

Some models even have bake and roast settings which makes them more like conventional ovens, so you could also roast a chicken and bake brownies. It’s like having another oven! Although your air fryer will be much smaller than your conventional oven. One of the drawbacks of an air fryer is that it usually comes with a small basket size, and you can’t really use it to cook a meal for the whole family.

Air fryers are a clear winner when it comes to health. When cooking with large amounts of oil, the food is fully immersed in cooking oil and so there is excessive fat added to it. In air frying, you can cook without oil or just use a fraction of the amount you’d use in deep frying. So it has less fat and cuts calories up to 70% to 80%.

Some researchers suggest cooking methods such as deep-frying can cause the development of dangerous compounds such as acrylamide. According to the International Agency for Research on Cancer, acrylamide may have links to the development of ovarian, breast, pancreatic, and other forms of cancer. Switching to air frying can considerably lower the risk of having acrylamide in your food. Acrylamide is a chemical that can form in some foods during high-temperature cooking processes, like frying, roasting, and baking.

Air fryers win in this category as well. Cooking food in oil requires you to heat a large container filled with scalding oil. This poses a risk of splashing or accidentally touching and even spilling the oil over yourself. There are no risks like that when it comes to air fryers -although they can get hot. If the instructions are followed carefully, it’s very safe to use.

Although air fryers can produce a crispy exterior similar to deep frying, nothing beats the consistency of the real deal. With an air fryer, you may notice at times that certain foods tend to come out drier than they would if they were deep-fried. If you can’t compromise on the difference of taste, then you may want to think twice about getting an air fryer.

An air fryer is an appliance that can perform multiple functions besides frying. By purchasing some accessories, you can even roast and grill foods in an air fryer. It also allows you to bake a variety of desserts in it.

Because of its small size and powerful heating, an air fryer cooks meals quicker than many other appliances. It can be your best friend when you are on a tight schedule. Making crispy chicken tenders or crunchy golden fries is quick and super simple and will get out of the kitchen in no time!